By M0PQA - Pablo June 23, 2020
Packet radio is, in essence, the transmission of data over radio using a protocol called AX.25. It is the mechanism of transmission under the hood for APRS. However, APRS is unconnected packet, while Packet Radio is connected. This implies that Packet can be used for a number of other applications, such as keyboard-to-keyboard chat or connecting to a mail server or a BBS -- not just "blast away" the message.
In this post, I'll cover how to install and setup packet radio from a Raspberry Pi, without any additional hardware, and for a fraction of the cost.
I was recently introduced to the wonders packet radio. It has both a post-apocalyptic and 80's nerd feelings to it that I'm enjoying a lot. The fact that my background is in computer science might have something to do with it, too.
Packet Radio is a marketing term to refer to AFSK-modulated FM using AX.25 at 1200 baud (or 300 baud on most HF bands). Traditionally, the modulation of the data was achieved by a TNC or Terminal Node Controller connected both the a computer and to a radio. On top of the ability to connect to other systems, TNCs usually provide a "listener program" that replies to incoming connections, as well as other applications such as mailbox and BBS.
TNCs are not cheap, and they provide only a limited functionality, which prevents many amateurs from buying and using one. From time to time, some of this devices appear on eBay, which drastically reduces the cost. Still, you will need to wire your own cable and mess around with the settings on your radio, and this is something that not everyone is up to.
There's a cheaper alternative for those who like to tinker with computers. Any Raspberry Pi - and any Linux system, for that matter - can handle the modulation and offer similar functionalities to a TNC, including PTT control.
Following below, you'll find a step-by-step guide on how to install AX.25 and Linpac on your computer:
Step 1. Install Hamlib and Direwolf
On one side, Hamlib is a software library that most amateur radio applications use to connect to your radio. Direwolf, on the other side is a software TNC: it will handle audio in and audio out, together with CAT and PTT control.
The installation of Hamlib and Direwolf, as well as their configuration,  is extensively covered in steps 2 and 3 in this previous blog post. If you follow those instructions, you will get them up and running in some minutes.
Step 2. Install AX.25
AX.25 is an old data link layer protocol for communications based on an even older protocol named X.25. X.25 was widely use before TCP/IP and the definition of the ISO/OSI stack -- it literally pre-dates the Internet as we know it. It was the protocol that ATMs used to communicate with the central offices of their banks.
The installation of AX.25 is as simple as installing a few packets:
Once done, you will need to add a line to a file. In order to do so, just execute the following:
Go to the end of the file and add the following line:
Where:
Step 3. Compile and Install LinPac
Unfortunately, the official Raspbian package for Linpac presents many issues. I strongly advice against using it. It will work much better if you compile Linpac yourself following these commands:
After running the last command, follow the command prompts to complete the installation. Essentially press Y (Yes) if you don't get any errors.
Step 4. Configure LinPac
Most of the configuration for LinPac will be done in the first launch. Before you can lauinch it, you need to execute the following instructions:
Step 5. Start Direwolf and attach a AX.25 port
Considering that you have followed the instructions to install and configure Direwolf from this other post, you can now safely start Direwolf, AX25 and LinPac. The order of the following commands is critical.
In a new terminal, type:
In yet another terminal, type:
You will need to execute these 6 lines every time you want to use LinPac. Maybe you want to consider creating a shell script file to launch all of them together.
Step 6. Launch LinPac
Now, onto LinPac. Just typeAnd answer the following questions:
At this point LinPac is ready to use! Just try your first connection with this command (yes, the : is a part of the command in this case).
MB7NCR is my regional server, managed expertly by Paul G4APL and Ann Lewis G7BSF. Their website is www.theskywaves.net, and you can find a plethora of information about Packet Radio and AX.25 in there. Big thanks to Paul for all his patience with noobs.
If connected, you will get a prompt. Use :D (DISCONNECT) to disconnect when you are done. To exit LinPac, use ALT+X.
And that's it. You are now ready to connect to other stations using Packet Radio from your Raspberry Pi, without any additional hardware.
As usual, leave a comment below, or drop me a note over email, Instagram or Twitter, in case you encounter any issues. 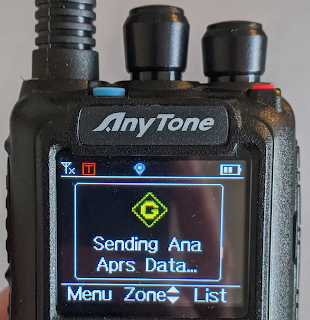 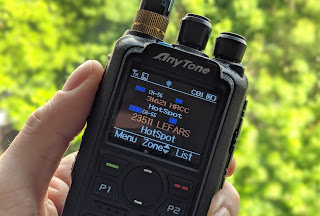 Few things in amateur radio are more frustrating  confronting a DMR handheld for the first time. In this post, I'll touch on the basics of a codeplug to help you overcome that frustration. Link to a working codeplug that you can borrow and adapt to your needs at the end. It also includes APRS and DPRS settings. By now, most of you have heard about DMR and the blockbuster Anytone 878. DMR has taken off as the leading digital voice mode due in good part to affordable handhelds and the ease of use of hotspots. Once properly setup, a DMR radio is simple to operate. However, loads of amateurs using a codeplug that was given to them, and that won't let them profit from any of the awesomeness of DMR. This post is for beginners that want to set up their brand new handies. I included my own codeplug at the end of this post. Step 1. Go get an ID This is not your callsign, but a number tied to your callsign. You will need it for the configuration of both your radio and you
Read more
eBay sniper